This is from Linh Dinh’s ‘State of the Union’ blog.

Linh is a US resident Vietnamese ex patriot commenting on life in Philadelphia by way, mainly, of street-scene photo-journalism. He manages to capture the essence of a decaying hopelessness interspersed with jingoistic evocations of patriotic America – per the sad and slightly absurd but very real and not untypical image below.

The following is is one of his occasional but always perceptive off-the-cuff reactions to current events: 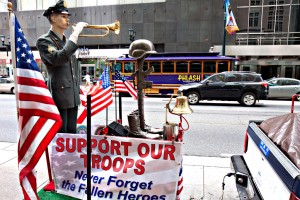 Upon hearing that Bin Laden has been officially pronounced dead, I thought:

Still, the US has long known where he was, but only decided to kill him now to

In any case, it would be interesting to get all the details of this operation and see the physical evidences. For every assassination or murder, there must be a corpse, but alas, there is no corpse! Less than six hours after news came that Bin Laden had been killed, it was announced that he had already been buried at sea. The official explanation: The US must respect the Islamic tradition that a corpse be buried within 24 hours, and since no country was willing to be his final host, not even Saudi Arabia, his homeland, Bin Laden had to be dumped where he could never be exhumed. How convenient. Case closed!

Such respect for a Muslim corpse from a country that seems to be fighting Muslims everywhere, that kills, imprisons and tortures Muslims, whose soldiers draped panties and smeared shit on Muslim heads, raped Muslim women and collected Muslim ears as trophies. America hasn’t exactly been shy about abusing Muslims, dead or alive, so why this sudden delicacy? Remember also that Uday and Qusay Hussein were killed by American troops on July 22, 2003, then buried on August 2, 11 days later.

Had Bin Laden been captured, and I will insist there was never any intention of catching this man alive, he would have to be tried in court, where his involvement with 9/11 must be proven, counter theories could be introduced and questions about 9/11 raised. In short, a nasty can of worms to be avoided at all cost.

Though long gone, Bin Laden had been extremely useful as a boogeyman for the American military industrial complex, but this ruse was running out of gas. Even with a fake, CIA-produced audio every now and then, the Bin Laden brand no longer captured, so it was time to close out this product line, not with a bang, exactly, since there’s no cadaver, but with plenty of noise nevertheless.

Now, back to our regularly scheduled programming.

“Every truth passes through three stages before it is recognised: In the first it is ridiculed; in the second it is opposed; in the third it is regarded as self-evident.”
Arthur Schopenhauer