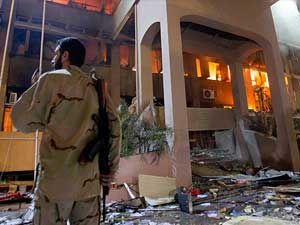 Wikileaks-released State Department cables from November 2007 and afterwards show the real reason for the mounting U.S. hostility to the Libyan government prior to the current civil war.

NATO has been dropping devastating bunker-busting bombs on Muammar Gaddafi’s home in an attempt to assassinate him. One son and several grandchildren have died but Gaddafi has survived. The State Department cables give background to the hostility directed against Gaddafi by the United States and other NATO powers.

One State Department cable from November 2007 (Wikileaks reference ID 07TRIPOLI967) sounds the alarm of “growing evidence of Libyan resource nationalism” by the Gaddafi government. This was almost identical language employed by the U.S. and British governments against Iranian Prime Minister Dr. Mohammad Mossadegh when he nationalized Iran’s oil field in 1951. Mossadegh was overthrown by a 1953 CIA coup that restored the Shah to the throne. It allowed U.S. and British oil companies to re-take ownership over Iran’s oil until the 1979 revolution.

The crime of “resource nationalism”

Condemning “Libyan resource nationalism” is diplomatic language. The U.S. government was furious that Gaddafi was moving to rein in and limit the power and profits of the western-owned oil giants that he permitted to come back into the country after George W. Bush in 2004 lifted economic sanctions against Libya.

The same cable refers to an angry speech that Gaddafi made in 2006 which was interpreted as a virtual act of war by the oil companies and the U.S. and western governments.

Gaddafi’s speech included these unacceptable words: “Oil companies are controlled by foreigners who have made millions from them—now, Libyans must take their place to profit from this money.”

Oil reserves in Libya are largest in Africa

Libya has the largest oil reserves in Africa and the ninth largest in the world with 41.5 billion barrels as of 2007. The U.S. government and oil industry surveys conclude that Libya has 63 years of reserves at current production rates if no new reserves were to be found. But Libya is considered to have many unexplored reserves. Libya has been a big prize for the western oil giants both because of the quantity of oil and of the particularly high quality of Libyan oil.

In 2008, according to another leaked State Department cable, Gaddafi summoned Conoco-Phillips Chief Executive Jim Mulva to a meeting in Sirte, Libya. There he threatened to expel U.S. oil companies and “threatened to dramatically reduce Libya’s oil production.”

The oil companies and the State Department, as the cables indicate, were increasingly agitated by Gaddafi’s interference with their operations. The Washington Post, which is a big cheerleader for the U.S./NATO bombing campaign, published a story on June 11, 2011, about the leaked Libya cables: “Labor laws were amended to ‘Libyanise’ the economy, and oil firms were pressed to hire Libyan managers, finance people and human resource directors.”

The U.S. government fully backed the Saudi monarchy and the Mubarak dictatorship, but turned on Libya—not because the regime violated human rights or democracy, but because Gaddafi sought to limit their power. The oil companies, however annoyed they were by having to work with the Libyan government, would have certainly continued their current business operations. The opening of a civil war inside of Libya in February 2011, however, gave a perfect pretext to overthrow the regime and place in power a government that the NATO powers hope will serve as a client regime.

In any country, Libya included, the masses of people can have many valid and legitimate grievances against their government. Even those who support Gaddafi against the NATO bombers probably have grievances. But the U.S., British, French and Italian governments are at war to protect their own interests. Protecting civilians and promoting democracy is of zero concern to Conoco-Phillips, Exxon-Mobil or any of the other oil giants.

The Wikileaks-released State Department cables make it clear that the basis for U.S. hostility to the Gaddafi regime was about who should control Libya’s vast oil reserves. Should it be Libya or should it be the biggest capitalist oil enterprises from western countries?

“Those who dominate Libya’s political and economic leadership are pursuing increasingly nationalistic policies in the energy sector that could jeopardize efficient exploitation of Libya’s extensive oil and gas reserves,” the November 2007 cable states.

In mid-May 2011, just six weeks after the NATO bombing of Libya began, leaders of the anti-Gaddafi rebel movement came to Washington, D.C., for “talks.” They spoke at the U.S.-Libya Business Council. The big oil companies were present. The rebels have employed a public relations/lobbying organization based in Washington, D.C., called the Harbour Group.

“Now you can figure out who’s going to win, and the name is not Gaddafi,” Nansan Saleri, the founder of the Houston-based Quantico Reservoir Impact company told the Washington Post. Saleri, former head of reservoir management at Saudi Aramco, explained why the company wouldn’t do business in Libya until now. “Everything in Libya—everything—had to be approved by Gaddafi or one of his sons,” he told the Post. Saleri continued, “Certain things about the mosaic are taking shape. The western companies are positioning themselves.” Within five years, he predicted, “Libyan production is going to be higher than right now and investments are going to come in.”

Libya today is resisting the new colonialism. The colonizers assign noble names such as “protecting civilians” to their military mission. But their role in Africa and the Middle East during the past decades and centuries deprive such propaganda of any credibility. They rely though on the uniformity of the corporate-owned media coverage about their “humanitarian motives” to disguise their crass and cynical plans in Libya and elsewhere.