For once, Thierry Meyssan is not offering us a clinical analysis of geo-political developments. He is reporting on facts that he witnessed firsthand: the story of his friend, Engineer Khaled K. Al-Hamedi. A story of horror and blood where NATO embodies the comeback of barbarism.
Voltaire Network 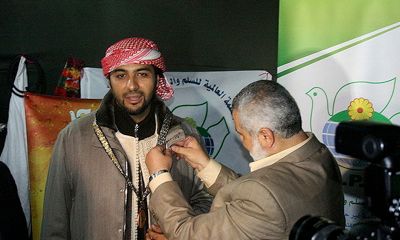 The [International Organisation for Peace, Care and Relief (IOPCR) is very active in Algeria, Iran, Sudan and Palestine. It brings relief to victims of natural catastrophes and armed conflicts. Its action is exemplary in Gaza and the West Bank and is widely praised by all. Here, Khaled el-Hamedi receives the medal of courage from the hands of Palestinian Prime Minister Ismail Haniyeh. He was also decorated by Mahmoud Abbas.

It was a family celebration, the Libyan way. Everyone had gathered to celebrate the third birthday of little Al-Khweldy. The grand-parents, the brothers and sisters and cousins were crowding inside the family house located in Sorman, 70 Kms West of the capital: a big garden where small houses had been built for the various members of the family, plain, one-floor houses.

No big luxury, just the simplicity of desert people. A quiet and harmonious atmosphere. The grand-father, Marshall Al-Khweldy Al-Hamedi, used to raise birds here. – He is a hero of the Revolution who took part in the overthrow of the monarchy and in his country’s liberation from colonial exploitation. All are very proud of him. – The son, Khaled Al-Hamedi, President of IOPCR, one of the most important Arab humaitarian associations, used to raise does. About thirty children were running around among the animals.

They were also preparing the wedding of his brother Mohammed, gone to the front lines to fight against NATO-trained foreign mercenaries. The ceremony was to take place here in a few days’ time. His fiancee was already beaming.

Nobody noticed that, among the guests, a spy had sneaked in. He was pretending to twitter his friends. In reality, he had just marked the targets and was relaying them through the social network at NATO Headquarters.

The next day, during the night of 19 to 20 June 2011, at around 2.30 am, Khaled went back home after having visited and assisted compatriots who had fled the Alliance’s bombings. He was close enough to his house to hear the hissing of missiles and their explosions.

NATO fired eight of them, of 900 kilos each. The spy had placed markers in each house, including the children’s bedrooms. The missiles were dropped a few seconds apart. The grand-parents had time to get out of their house before it was destroyed. It was already too late to rescue the children and grand-children. When the last missile hit their house, the Marshall had the instinctive reaction to shield his wife with his body. They had just stepped out of the door when they were flung fifteen meters away by an explosion. But they survived. 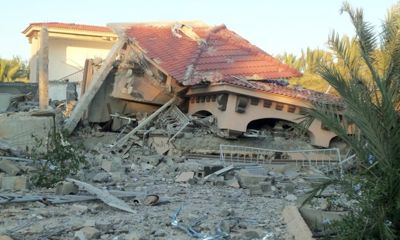 When Khaled arrived, there was only devastation. His wife, whom he loved so much, and the child she was bearing were gone. His children, for whom he would have given anything, were crushed by the explosions and collapsing ceilings.

The houses were left in ruins. Twelve mutilated bodies were lying under the rubble. The does, hit by fragments, were agonising in their pen.

The neighbours who rushed to their rescue silently searched through the debris for any sign of life. Unfortunately, there was no hope. The children didn’t stand a chance of escaping the missiles. The corpse of a beheaded child is extracted. The grand-father is reciting verses of the Coran. His voice is firm, he does not cry. His pain is too strong.

Meanwhile, in Brussels, NATO spokespersons declared to have bombed the headquarters of pro-Ghaddafi militia in order to protect the civilian population from the tyrant who is repressing it.

It is not known how the whole thing was planned by the targets committee, nor how the chiefs of NATO’s general staff followed the unfolding of the operation. What is clear is that the Atlantic Alliance, with its spruced-up generals and right-thinking diplomats, has decided to murder the chidren of Libyan leaders to break their psychological resistance. 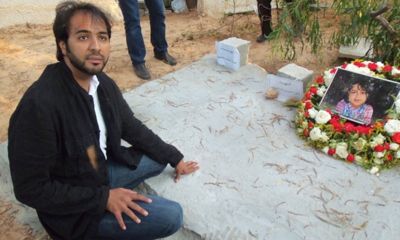 Since the XIIIth century, European theologists and jurists have prohibited the assassination of families. Only the mafia has broken this absolute taboo. The mafia and now NATO.

On 1st July, when 1.7 million people were demonstrating in Tripoli to defend their country against foreign aggression, Khaled went to the front to bring relief to refugees and the injured. Snipers were waiting for him. They tried to kill him. He was seriously injured; however, according to the doctors, his life is no longer in danger.

NATO’s dirty work is not yet finished.

“We possess several hundred atomic warheads and rockets and can launch them at targets in all directions, perhaps even at Rome. Most European capitals are targets for our air force…. We have the capability to take the world down with us. And I can assure you that that will happen before Israel goes under”
Martin van Creveld - Israeli Military Historian  -  Interview 2003