Obama, Cameron and Sarkozy sent a message to the African Union in their jointly written April 14 op-ed: They’ll block any attempt to negotiate peace in Libya that doesn’t include Gaddafi’s ouster and the opening of Libya’s economy.
By Stephen Gowans 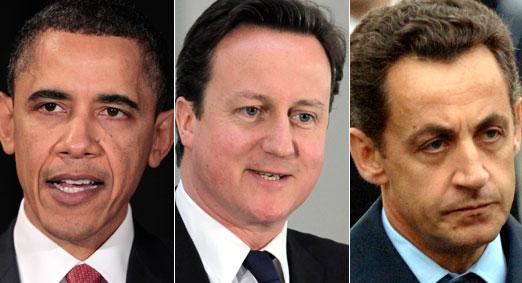 On April 14 US president Barak Obama, British prime minister David Cameron and French president Nicolas Sarkozy wrote an op-ed titled “Libya’s pathway to peace.” Appearing in the International Herald Tribune and two other newspapers, the op-ed set out US, British and French goals for Libya. One would be peace, but the pathway was to be Gaddafi’s exit, and his replacement by the Benghazi rebels.

While not presented as such, the op-ed was in fact a rejection of an African Union proposal for a negotiated settlement.

The AU had dispatched a delegation to Tripoli to meet with Gaddafi four days earlier, on April 10. The delegation proposed an immediate cease-fire, delivery of humanitarian aid, and negotiations between the Libyan government and the Benghazi rebels. Gaddafi accepted. But when the delegation arrived in Benghazi the next day, the rebels let it be known that the only peace they were interested in was one that saw Gaddafi, “his sons and his inner circle leave immediately.” (1)

US secretary of state Hilary Clinton quickly echoed the rebels’ position. Nothing could be resolved, she said, without “the departure of Gaddafi from power, and from Libya.” (2)

Peace was impossible in Libya without Gaddafi’s exit, the leaders insisted in their op-ed, because Gaddafi was the main threat to peace. It was “impossible to imagine a future for Libya with Gaddafi in power” they wrote, and added that “so long as Gaddafi is in power, NATO must maintain its operations.” Their case was based on the fiction that the conflict in Libya isn’t a civil war between rebels in the east and loyalists in the west but between the state and the people, as was true in Tunisia and Egypt and is true in Bahrain and Yemen.

As for Gaddafi being an obstacle to peace, that was belied by his acceptance of the AU peace proposal. But the armed uprising has, from the beginning, had nothing to do with peace. It has always been about regime-change.

Gaddafi is wrongly fit by the three leaders, as well as by supporters of the Western military intervention, into the mold of Bahrain’s Khalifa regime, which has used armed force to violently suppress a popular peaceful revolt. The uprising in Libya was armed, not peaceful, and while it may be popular in the east among tribalists, royalists, and radical Islamists led by neo-liberals connected to the United States, it has little popular support elsewhere in the country.

Despite casting the Gaddafi government in the role of the Khalifa regime, the leaders make no reference to the latter, which remains largely invisible in discussions of the “Arab spring” and which provides the Pentagon with a headquarters for its Fifth Fleet and runs a low-tax, no minimum-wage, foreign investment-friendly economy. If the US, British and French leaders were truly interested in protecting civilians they would have long ago imposed a no-fly zone over Bahrain and ordered the Saudi monarchy, surely the most regressive force on the planet, to withdraw its troops from Bahrain. But what they’re really interested in achieving in Libya is what was long ago achieved in Bahrain: a neo-colonial puppet regime that opens its country to Western military bases and unconditional exploitation by foreign corporations and investors.

And so Obama, Cameron, and Sarkozy used their op-ed to declare that there must be “a genuine transition” in Libya “led by a new generation of leaders” and that “in order for that transition to succeed, Gaddafi must go and go for good.” Significantly, the transition would usher in the new Western puppet. There are two indications of this.

The first is the nature of the rebel leadership. Its key members have important connections to the United States. Khalifa Heftir, a former Libyan Army colonel, has spent the last 25 years living seven miles from CIA headquarters in Langley, Virginia with no obvious means of support. (3) Mahmoud Jibril “earned his PhD in 1985 from the University of Pittsburgh under the late Richard Cottam, a former US intelligence official in Iran who became a renowned political scientist specializing on the Middle East.” Jibril “spent years working with Gaddafi’s son Saif on political and economic reforms … (b)ut after hardliners in the regime stifled the reforms, Jibril quit in frustration and left Libya about a year ago.” (4) Jibril has been out of Libya since the uprising began, meeting with foreign leaders. (5) Then there is the rebel government’s finance minister, Ali Tarhouni, who has been in exile for the last 35 years. His latest job was teaching economics at the University of Washington.

The second indication is provided in the three leaders’ op-ed. Libya, they write, must “develop the institutions to underpin a prosperous and open society.” Revealingly, the three leaders tell Libyans what institutions they should develop. But what if Libyans don’t want an open society at this point in their development? What if they want what the United States, Britain and France have had through long parts of their history (and still do have): a society closed to outsiders in strategic areas?

While the institutions of an open society aren’t exclusively economic, an open society is understood to be one whose doors are open to unconditional integration into the global economy. This differs from the Gaddafi government’s strategic integration, based on linkages aimed at increasing real wages in Libya rather than maximizing returns to foreign investors. This isn’t to say that Libya hasn’t welcomed foreign investment where it makes sense for the development of the country, but it is likely that the open society Obama, Cameron and Sarkozy foresee for Libya, has little to do with what makes sense for Libya, and everything to do with what makes sense for US, British and French investors and corporations.

No Responses to “Protecting Profits from an Outbreak of Peace”

“If They get you asking the wrong questions, They don\'t have to worry about the answers”
Thomas Pynchnon  -  Gravity\'s Rainbow