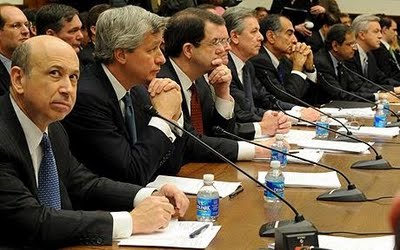 No one will miss these people: The elite should think carefully before raising the stakes. Nation-states may retaliate in kind to threats of assassination and growing, naked aggression.

Peddling a policy that includes assassinating the leader of a sovereign nation, besieged under blatantly false pretenses, sets a dangerous precedent that may backfire in the faces of the arrogant men calling for it. Lindsey Graham and John McCain, both of the meddling International Republican Institute implicated in funding and fueling the “Arab Spring” to begin with, have called for the assassination of Libya’s Qaddafi and members of his inner circle. The London Telegraph also reported that Foreign Secretary William Hague refused to rule out using US drones to assassinate Qaddafi.

With the US now openly admitting to recruiting, training, funding, and equipping armies of “activists” to go back and subvert their nations’ governments, and with China and a growing list of other nations pointing the finger for fueling subversion directly at Washington, the global scope of this operation and the meddling hands behind are exposed for the whole world to see. What comes next will be a series of proxy conflicts of increasing violence. It is quite clear that humanitarian concerns are entirely contrived excuses propelling this global campaign along. As this facade of legitimacy crumbles, the imperialist nature of the aggression becomes more overt and we now see what looks more like the opening salvos of World War III than a “wave of democracy” sweeping the world.

Should Syria fall to Western-funded and fueled subversion, Iran will undoubtedly be next. The stakes for Russia and China will be raised still higher, and Iran itself will be backed into a corner it hasn’t been in since the brutal and protracted Iran-Iraq War of the 80s. Should the West succeed in assassinating Qaddafi after this regional campaign of naked aggression, they will open the door for similar calls to be made against them by a world awake to their reckless, gluttonous tyranny.

Nation-states could repay the threat in kind

When the violence escalates, do these leaders in America feel confident enough that the people they supposedly lead will come to their aid when calls are made in turn for their heads? Do they really believe the people of America will be galvanized by foreign nations surgically retaliating against these increasingly unpopular figures? Would the world miss or mourn the loss of the bankers, industrialists, geopolitical power brokers or the myriad of other jackals, rats, and cockroaches that hide in the dark of elitist power? Would the average American, many of whom have never heard their names, even make a whimper in protest?

The global elite should tread lightly indeed, for they have created a public who does not see them and will not miss them once they are gone. A skillful nation may decide to leave the feckless buffer of pandering politicians intact, and instead target the corporate-financier oligarchs themselves. These oligarchs may be under the delusion they have nothing to lose, for it is the people that bleed and go bankrupt in their contrived wars, but the reality is that the world has nothing to lose by looking past the battlefields and politics that are bleeding them dry, and into the eyes of the true tormentors of humanity. Russia has already thrown degenerate global elitist Mikhail Khodorkovsky into a Siberian prison, proving that the globalists do have much to lose and are entirely powerless when finally confronted by those who know their game.

While it is up to nation-states to decide the execution of force against this now apparent global menace, we as individuals must concentrate on removing and replacing their tentacles in our local communities. From developing our own forms of private currency, to trading and bartering, to growing a simple garden or learning a trade, we can begin eroding the power from which such arrogance is expressed. And while nation-states can use force to swat down these parasites, we the people can begin draining the swamps of ignorance and needy dependence amongst us that have allowed them to flourish for so long.

For decades the global corporate-financier oligarchs have waged full-spectrum war against humanity, the nation-state, the community, the family, and the individual. It is time to face them with full-spectrum resistance.

“Parsons was Winstons fellow-employee at the Ministry of Truth. He was a fattish but active man of paralysing stupidity, a mass of imbecile enthusiasms -- one of those completely unquestioning, devoted drudges on whom, more even than on the Thought Police, the stability of the Party depended.”
George Orwell  -  1984