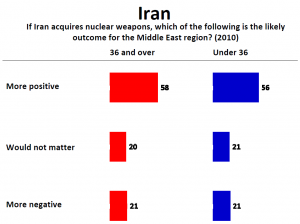 For those whose understanding of the world is moulded and shaped by the Western mainstream media, this poll will likely come as a bit of a shock; and especially so in light of MSM reports about the latest WikiLeaks revelations.

It is the latest in a series of annual polls conducted by Zogby International in conjunction with the University of Maryland and the Brookings Institute and published in August 2010.

There can hardly be a Western outlet that has NOT reported the covert urgings of Arab governments for the US/Israel to attack Iran, because of course it accords nicely with our ‘Official Narrative’ of Iran as part of the axis of evil; and yet its seems, reporting of the phenomenon has been next to non-existent in those same Arab countries.

This Poll tells you why that is so. 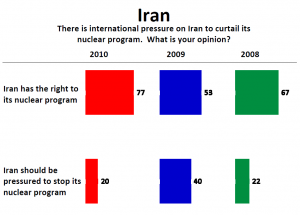 You see the populations of those Arab counties have diametrically opposed views on the matter to those of their governments; and their governments, having close to zero popular legitimacy, are therefore fearful of stirring rebellion by having their covert urgings reported.

For similar reasons – and no matter it’s substantial authority – the Western MSM are unlikely to give prominence to the poll because it tells to wrong story.

The full poll findings are available on WikiSpooks here

“Power concedes nothing without a demand. It never did, and it never will. Find out just what any people will quietly submit to, and you have found the exact measure of injustice and wrong which will be imposed upon them, and these will continue until they are resisted (…) The limits of tyrants are prescribed by the endurance of those whom they oppress.””
Frederick Douglas