Control of information is control of people. Manipulation and distortion of information, over-classifying information, and the outright attempt to manufacture reality is occurring on an unprecedented scale. These trends have no place in a democracy.

We defend Julian Assange and WikiLeaks because this media organization has given common people access to truthful information we are systematically being denied. The door WikiLeaks has opened sheds light on rampant abuses of secrecy, criminality and unethical behavior on the part of both governments and corporations.

For bringing people truthful information about their governments, Julian Assange has been subjected to great personal duress and even threatened with assassination. Moreover, in order to ensnare Assange on charges of espionage, the U.S. government has signaled that it is willing to significantly weaken the First Amendment and destroy our free press, not to mention freedom of speech and freedom of information. While WikiLeaks is indeed a complex phenomenon, the U.S. government’s behavior is highly alarming.

As citizens who support legitimate democracies and the fundamental values of truth and justice, we seek to change this. Please stand with us in defense of WikiLeaks and Julian Assange.

Open Letter to the United States Government Regarding WikiLeaks, Julian Assange and the Fundamental Tenets of Democracy and Open Societies

To President Obama, US Senators and Congressmen and women, Attorney General Eric Holder, the Department of Justice, and all of those involved in the attempt to prosecute Julian Assange, founder of the nonprofit news organization WikiLeaks.org:

We are a diverse group of people from around the world who have come together for a common purpose: to defend WikiLeaks, to ask the United States to cease its attempts to manufacture a case against Julian Assange, and to defend democratic principles and our fundamental rights guaranteed therein. We are professionals, homemakers, activists, students, and others who believe that government derives its power from the consent of the governed, as stipulated in the Declaration of Independence, but that citizens can only give meaningful consent if they are fully informed about their government’s actions. Nothing more violates American principles, which inspire both those of us who are and are not American citizens, than the idea that “government knows best” and has the right to deceive its own people.

The Wikileaks documents have revealed that the U.S. government has been keeping enormously important information secret from the American people, such as the fact that the U.S. government knew of the mass murder of civilians in Iraq even though it claimed it did not; that the U.S. government failed its legal responsibility as an occupying power by handing civilians over to Iraqi police units knowing they would be tortured and killed, even though it claimed it did not; that U.S. officials believe the Afghan government is corrupt and unpopular, even as they falsely claim to be fighting for democracy in Afghanistan; and that U.S. officials are extremely worried about the safety of Pakistan’s nuclear stockpile, a potential matter of life and death that they have kept from the people of the world.

When the N.Y. Times released the Wikileaks “Afghan Logs” on July 25, its headline read: “View Is Bleaker than Official Portrayal of War in Afghanistan.” This revealed, according to America’s “newspaper of record,” that the U.S. Government was hiding the truth from its own people. Is it really right that the proud citizens of America should need Wikileaks to discover vital truths denied them by their own government?

U.S. officials claim they have a right to deceive the American people, and prosecute WikiLeaks and Julian Assange, on the grounds of “national security”. But this information is clearly known to America’s enemies. It is the American people who have been denied it, information critical to their ability to make an informed decision as to whether or not to support their government’s war-making, including putting their sons and daughters at grave risk of death or crippling injuries.

The U.S. Government claim that Wikileaks has endangered national security has been invalidated by its own Defense Secretary, Robert Gates, who has stated “is this embarrassing? Yes. Is it awkward? Yes. Consequences for U.S. foreign policy? I think fairly modest.” The German Interior Minister has stated that “WikiLeaks is annoying, but not a threat”, and the BBC has reported that “Wikileaks: US allies unruffled by embassy cable leaks.”

The result of any U.S. government prosecution of Wikileaks and Julian Assange will be to restrict the truthful information American citizens receive about their government’s foreign policy. But the U.S. cannot promote democracy abroad by limiting it at home.

We urge you to halt your undemocratic prosecution of Wikileaks; and to instead learn from it by providing the public with the honest and truthful information upon which democracy depends. 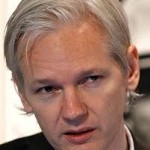 In an interview with Times of India published on 26 April 2011, Julian Assange say that Rudolf Elmer is effectively being held hostage by A Swiss Bank. There is a video of the interview on the Times web site accessible through the above link. Assange says that he has been approached by a third party claiming to represent the bank with a message that, if he returns all the leaked (and not yet published) bank data in the possession of Wikleaks, the bank will work to have Rudolf Elmer (currently in prison on the Swiss equivalent of remand whilst investigations proceed) released – see this ……. [Full Post]

“In the future, I want my children to grow up with the belief that what I did here was wrong, in a society that doesn,t deem that idea unpatriotic”
US Marine Alex Horton aged 22  -  Blog entry while serving in Iraq in 2004