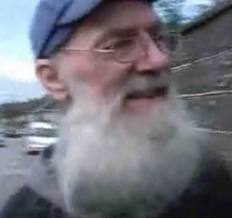 At 4pm on Thursday 12th May at Southwark Crown Court the jury returned and declared Muad’Dib (Anthony John Hill) innocent of attempting to ‘pervert the course of justice’.

Mr. Hill has spent 151 days incarcerated in Wandsworth prison over the past few months and this verdict spared him, mercifully, a sentence of up to 20 years in jail.
His offence? He had sent six DVD copies of his film ‘7/7: The Ripple Effect’ to various persons at the time (in 2008) of the trial in Kingston of three ‘terror’ suspects, alleged co-conspirators with the London ‘suicide bombers’. The DVD’s were intercepted and never reached their targets. The Kingston suspects were found innocent (only to later be retried for the same offences, but that’s another story).

Muad’Dib’s trial started on Monday 9th May, with a challenge to the monarchy and, hence, the authority of the court. This was ruled ‘out of order’ by the judge. On Tuesday a jury were sworn in.

On Wednesday they watched all of his film, ‘The Ripple Effect’, in open court.

Over the Tuesday and Wednesday the jury heard in-depth discussions of both 7/7 and 9/11, with Mr Hill laying out clearly, and at his own leisurely pace

under cross-examination, the reasons he believes that both these ‘attacks by terrorists’ were, in fact, false flag attacks by agencies of the state against its own people carried out with the purpose of providing a pretext for invasion of innocent countries in the middle east in order to control their natural resources.

This was surely the first ever fully-explored set of such allegations of false flag terror made against any state before an ordinary collection of the citizens of that state.

It is also clear from the verdict that, when such information is placed before such ordinary citizens the majority of them ‘get it.’

The jury had announced that it could not be unanimous, so the judge allowed a ‘majority verdict’, i.e. ten or more of the 12.

It is surely not unfair to deduce that Southwark Crown Court’s jury of ordinary persons did not reject Muad’Dib’s false-flag narrative as outrageous or even necessarily untrue. One wonders how many of that jury have now themselves been converted into active ‘troofers’?

During the trial (on Wednesday) JAH/Hill/Muad’Dib was asked why he moved to Ireland: “To pursue my study of the lost Ark of the Covenant” was his reply. Here is a character, both serious and refreshing, who brings a mythic dimension into life. Onlookers were impressed by the way he was able to conduct himself without fear in the witness-box, sometimes pausing 5-10 seconds to reflect, before replying. A group of  up to 25 supporters attended the four days of the trial, a couple travelling from as far afield as Finland and the state of Montana.

Let’s hope that will be the end of the persecution of Mr JAH by the British state – and, that he soon starts on a 2nd edition of his Ripple Effect.

It’s the opinion of Sheffield University social-sciences professor Ridley-Duff, that Mr Hill’s Ripple Effect’s narrative of what happened on that day, is more plausible and better fits the facts than did the BBC’s 7/7 ‘Conspiracy Files‘ program. His well-referenced study focussed very much on what happened at Canary Wharf on that morning, seeing the Ripple narrative, whereby the young alleged bombers had been inveigled into a terror drill that morning, then fled to Canary wharf where they were shot – as the best account yet. The new 3rd edition of my book Terror on the Tube endorses this view. In contrast, the so-called ‘July 7th Truth Campaign’ has scoffed at the Ripple narrative calling it ‘evidence-free conjecture,’ a quite breathtaking (and very revealing) remark.

“In the future, I want my children to grow up with the belief that what I did here was wrong, in a society that doesn,t deem that idea unpatriotic”
US Marine Alex Horton aged 22  -  Blog entry while serving in Iraq in 2004